A canyon-like tower by MVRDV and a twisting structure by Studio Gang are among the buildings to be revealed for a new San Francisco development.

MVRDV, Studio Gang, Henning Larsen and WORKac make up the four practices that have teamed up to design buildings for a new neighbourhood called Mission Rock.

The development will be located in the Mission Bay neighbourhood, on 3rd Street in between Terry Francois Boulevard and Mission Rock Street. It will span a 28-acre waterfront site on San Francisco Bay that is currently used as a parking lot. 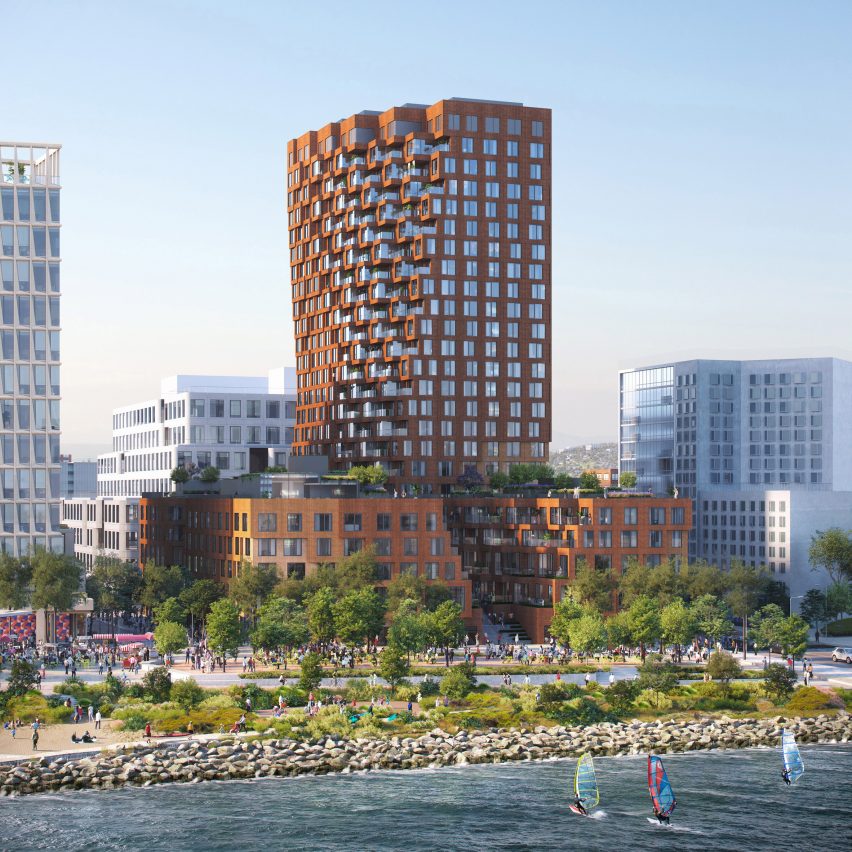 Rotterdam firm MVRDV has proposed mixed-use tower, Building A, that features a 23-storey construction with box-shaped units that project out to form a pixelated effect.

It is nicknamed The Canyon because MVRDV referenced California's mountains when designing, with the intention to bring back the city's hilly topography missing on the flat asphalt plot.

"We wanted to establish a dialogue between the waterfront, the ballpark, and the robust Californian rock formations," said MVRDV co-founder Nathalie de Vries.

"Those formations inspired The Canyon's architectural form: steep rocky walls with a narrow valley running between them, thus creating a mix of apartments of different sizes, roof terraces, and lush public spaces which feel welcoming to all."

The project comprises a central tower as a "canyon" that will "fracture" the north-east podium to make a building form of its own and also a lush space at ground level. Another volume, known as the "annex", will contain a separate lobby on the east side of the building.

At the base of MVRDV's tower is a podium with a similarly faceted, red exterior. Located here will be retail, office and commercial spaces.

The building will scale 240 feet (73 metres) and contain about 285 residential units. Mechanical equipment will be housed on the roof in an additional 14-foot (4.3-metre) volume, and a rooftop patio, partial basement for bike parking, and space for the District Energy System round out the design.