High society: a minimalist chalet in the Alps

The interior of this three-bedroom apartment may be the height of cosy, understated luxe, but it’s the views that count: snow-covered peaks, dense pine forests and a picturesque mountain village all nestled in a valley 1,400m above sea level. La Thuile sits at the extreme west of Italy’s Valle d’Aosta, close to the border with France and Switzerland, part of a vast ski area known as Espace San Bernardo. 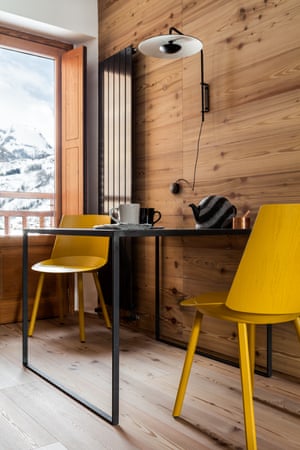 Across two floors, the apartment is almost entirely clad in aged larch, the wood a rose-pink tone. It is simply furnished, with mostly unadorned walls and bulb pendant lights; the odd metallic table, brass lamp, fur throw and colourful textile prevent it feeling entirely spartan. On the ground floor is an open-plan living and dining area, complete with wood burner; a small kitchen; and a guest bedroom and bathroom hidden behind an almost invisible door. In the centre, a black iron staircase spirals up to the first floor through a hole in the ceiling, resembling a fireman’s pole with steps. Here, under the eaves, are the master bedroom, a children’s room, and a bathroom, the shower clad in local stone. There is no clutter, excess furniture or trimmings: in the master bedroom, nooks built into the cladding serve as bedside tables; even the kitchen cabinets have wide holes rather than handles. 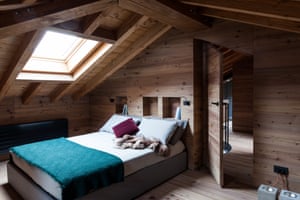 The building references a baita, a traditional hut found in the western Alps, says the architect Francesca Marchetti. “They are made from stone and wood, with steep roofs covered in stone slabs. And they have balconies, to take in the air and the views.” The interior, she adds, has a simplicity “that renders it almost Japanese”. 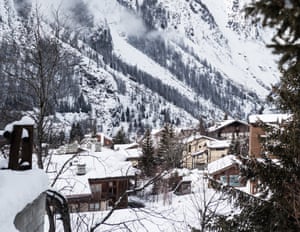 For the owner, it’s somewhere he can “disconnect”, ski and walk – an hour door-to-door from his weekday home in Geneva, a calm oasis among the mountains.