For a Danish Beach House, Jan Henrik Jansen Comes ‘Round to a New Strain of Modernism

Tucked in a thicket of birch trees on the Danish isle of Møn sits a summer cottage best described as a modernist hobbit hole. A cluster of cylindrical modules clad in slim spruce trunks, the structure wouldn’t be out of place in a fairy tale. It’s a house of charming contradictions whereby the rough-hewn exterior belies the precise detailing and sparseness within.

The dwelling is the brainchild of German-born, Copenhagen-based architect Jan Henrik Jansen, who’s no stranger to Møn’s rugged beauty. This is the third home he’s designed and built for himself on the island—and the most unique by a long shot, with its compellingly curvaceous form. Located a quarter-mile from the beach, the property was intended as a holiday home for his family and a vacation rental when they’re not in residence. Around the time Jansen was conceptualizing the design, he and his wife, Louise, welcomed baby daughter Alva (now 6). The desire to build a magical home fit for a child’s view of the world supplanted his initial impulse to create architecture with stark lines à la Mies van der Rohe. “Having Alva changed our lives and our outlook in every way,” Jansen confirms.

A gargantuan hurdle was gaining planning permission for this type of structure on the rural island. “Summer homes in the area fit into a very narrow aesthetic framework,” Jansen says. “This design is a strategic ‘misinterpretation’ of the building codes. The municipality and neighbors tried to reject it, but couldn’t really do so, since it ultimately complied.” It helped that his previous two efforts on the isle netted local design awards. 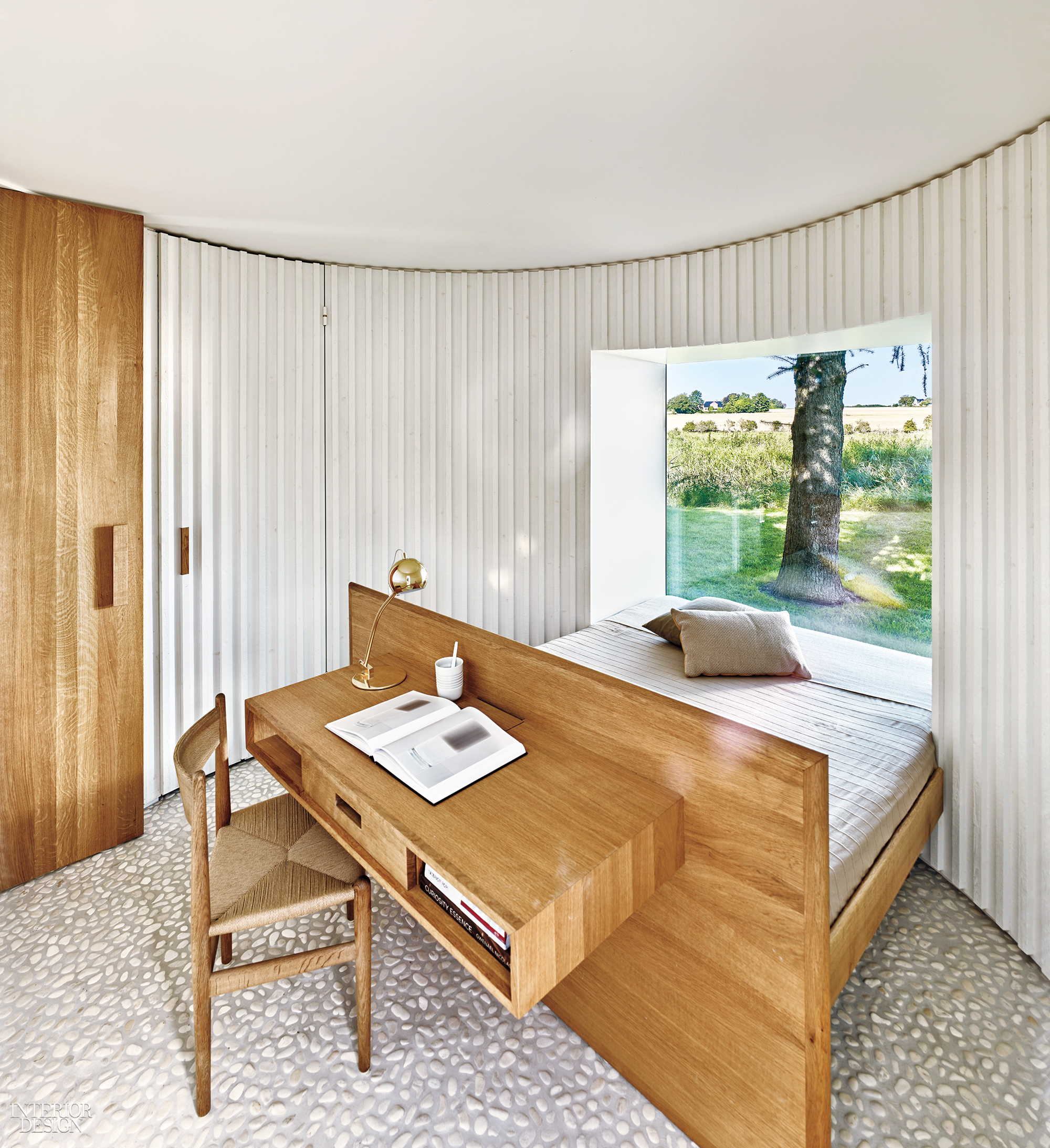 Each of the three bedrooms features a custom oiled-oak bed with integral desk. Photography by James Silverman.

Aided only by a carpentry assistant when necessary, Jansen built the place by hand—from pouring the concrete to laying tiles. He even constructed the curved formwork sections for the foundation in a friend’s barn, and drove them across the island via car. This despite having no proper training in construction, other than small projects at his parents’ house growing up and during architecture school. “I had to resolve and develop a lot of details due to the shape and construction of the building,” Jansen explains. “Luckily, I’m rather perfectionistic and think things through before executing.”

The 1,080-square-foot three-bedroom was completed over the course of five years, with Jansen working 15-hour days, two or three times a week, when client deadlines and weather permitted. “We had a few really cold winters,” he recalls. Working module by module allowed him to finesse minutiae like the river-rock flooring. “I like to work on a single piece of the puzzle. If you start with the overall design it’s harder to add details,” he explains.

Jansen designed the nine cylinders as separate “cocoons,” each devoted to a different function. Those dedicated to cooking and lounging are adjacent, the latter connecting to the master suite. On the opposite side of the kitchen/dining module is a round hall serving two more bedrooms, a second bath, and a covered terrace. 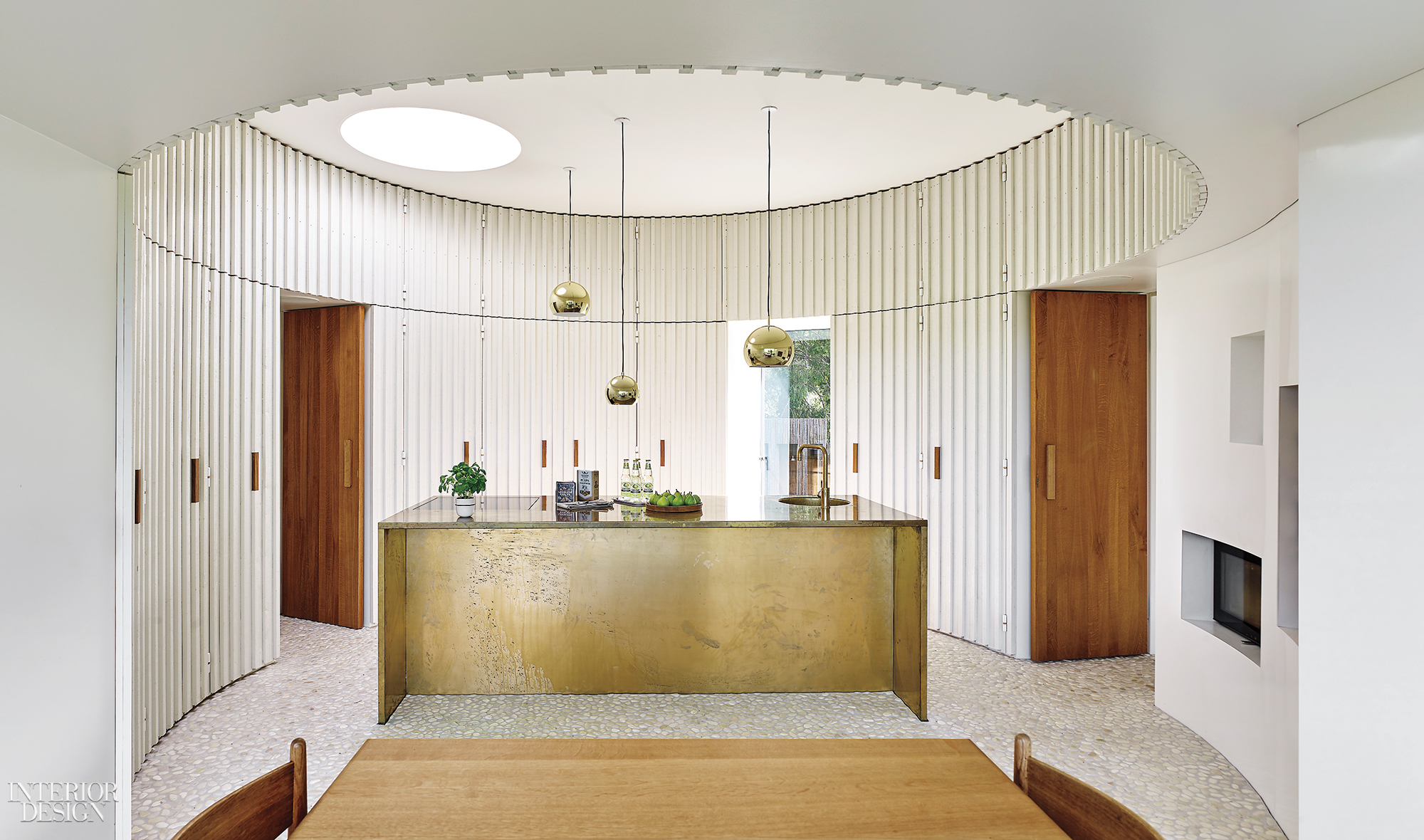 One of the most striking achievements is the contrast and connection between outside and in. From the approach, the structure looks as though it might contain a dark rabbit warren of rooms. “The outer shell mimics and integrates into the setting,” Jansen says. “I didn’t want to do an elegant sculpture in the sun.” But the inside is in fact awash with natural light and crisp, bright spaces.

Each cylinder incorporates one or two bay windows framed with pre-rusted Corten steel and carefully positioned to capture the views of surrounding meadows and hills. Interior walls are clad with rough-sawn pine strips painted white, giving a satisfying texture and warmth to each room without sacrificing simplicity. “White makes it feel like a gallery in which the landscape views function as artworks,” the architect declares. 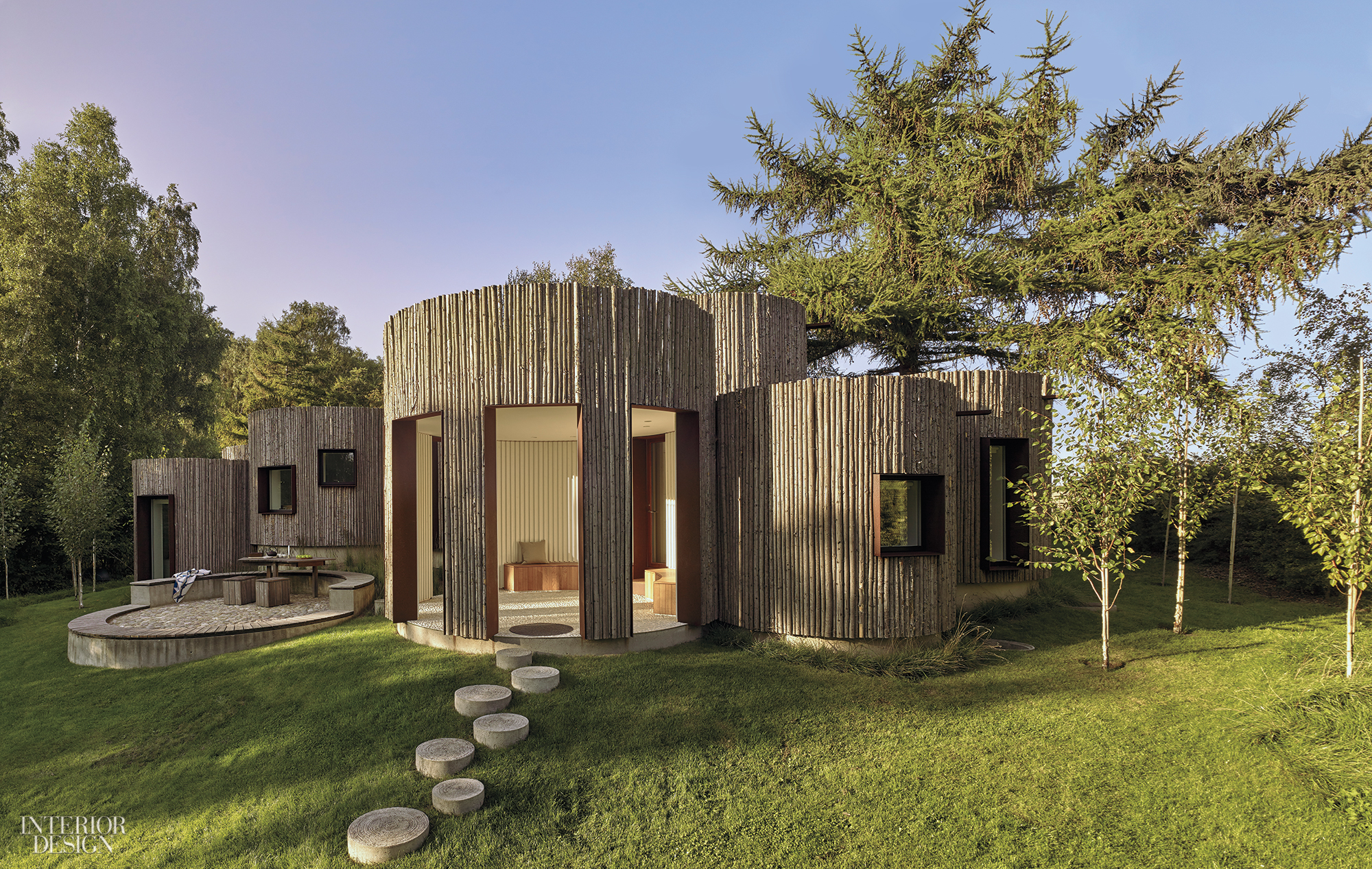 Corten steel frames the windows and doors. The patio furniture is custom. Photography by James Silverman.

A challenge was figuring out how to create furniture for what are effectively circular rooms. “Was I going to have a circular bed? No, I don’t think so,” Jansen says with a chuckle. (There is a curlicue of a leather sofa in the lounge, however.) The bay windows are deep enough to accommodate built-in beds and seating units. Most of the furniture is bespoke, including the oiled-oak dining table and the aforementioned sofa. Same goes for the brass kitchen island, crafted by a local blacksmith who had never worked with the material before. In this way, Jansen avoided cost-prohibitive specialist artisans who wouldn’t have fit within the tight budget.

The project now wrapped, Jansen can finally kick back and enjoy the fruits of his labor—fishing, swimming, kayaking, and strolling along quiet beaches that trace the island’s famed white-chalk cliffs. Having served as architect, building contractor, site manager, tiler, joiner, carpenter, decorator, and gardener, he more than deserves a little R&R.