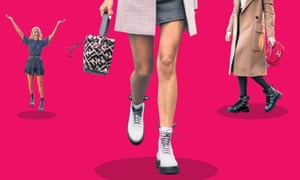 The temperature dial has dropped, puddles are getting bigger, and those Stan Smiths aren’t cutting it – cue winter’s secret weapon: the stomping boot.

It’s a part-hiking, part-snow boot with Dr Martens punk attitude. It is usually lace-up with a shearling or faux-fur trim, and the clumpier the better. Most importantly, it is waterproof and warm. But we will leave Millets to extol the virtues of practical footwear – we’re here to tell you that it is now perfectly acceptable to wear it not just for walking the dog, but as a bona fide fashion statement. 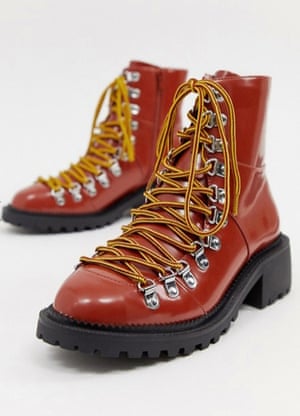 Countless catwalk brands have stamped the trend on the style landscape – most notably Louis Vuitton, Gucci and Moncler. The luxury online retailer Net-a-Porter says Prada is a bestseller and stocks styles priced from a reasonable £135 by Sorel, to a more extravagant £995 by Christian Louboutin. The options at the other end of the spectrum are just as chic. Marks & Spencer has a chunky lace-up pair for £45, New Look’s contrast lace pair cost £34.99, and Dr Martens Kolbert Snowplow boots come in at £140. 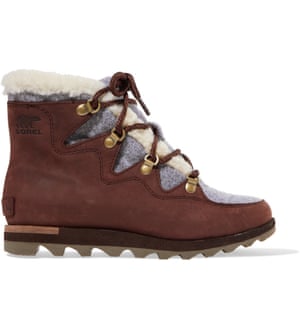 The stats back it up. In October Dr Martens revealed that its sales and earnings are on the rise, while the global fashion search platform Lyst says searches for hiking boots have increased 46% over the past six months. At Asos, hiker-style boot sales are up 74% compared with last year. The online retailer’s own-brand £45 Apex style, which comes in two colourways, went on sale in early October and promptly sold out of all 2,500 pairs. Its Ablaze style, priced £40, is still available. 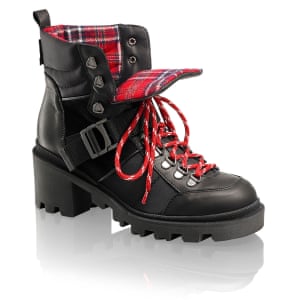 More traditionally associated with men, it is no surprise that the stomper boot is enjoying a renaissance in womenswear right now, says Dr Carolyn Mair, the author of The Psychology of Fashion. “Unisex clothes make a statement that women really do want equality, not only in what they do at work and home, but also in how they dress. This movement has been on the back burner for years, but the #MeToo movement and the scandal over pay inequality has pushed it forward. These days fashion is moving more towards how a woman dresses for herself as much as she does for any man or woman.” 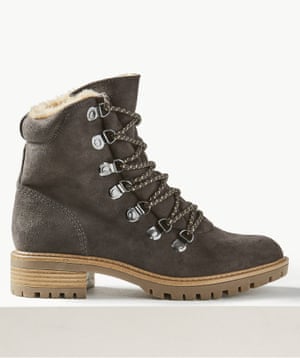 Their surge in popularity reflects the influence of street-style stars – who wear theirs with everything from floaty maxiskirts and chunky jumpers to tights and shorts – and stars such as Zoë Kravitz and Keira Knightley. It is likely to become even more popular because of the TV presenter Holly Willoughby, who, this week, chose to wear not one but two different styles of tough-talking boots, by Grensonand Russell & Bromley, for her jungle debut on I’m A Celebrity, alongside co-host Declan Donnelly. For someone who has built a 4.4 million Instagram following using the hashtag #HWStyle and whose selling power is so great that M&S has pinned its hopes on the star to sell its new-season wardrobe, Willoughby’s track record shows that if there is anyone who can take a trend mainstream, it is her – and maybe make headway with gender stereotypes in the process.

“These sorts of boots make a statement about the wearer, which is the opposite of the passive, look-at-me image portrayed by very high heels that look difficult to walk in – these boots say comfort comes before passive sexuality,” says Mair. “The more we see images of women doing something physical or at least wearing clothes designed for action, rather than just standing staring into space to be objectified, the more women are portrayed as cognisant beings.”

This article contains affiliate links, which means we may earn a small commission if a reader clicks through and makes a purchase. All our journalism is independent and is in no way influenced by any advertiser or commercial initiative. The links are powered by Skimlinks. By clicking on an affiliate link, you accept that Skimlinks cookies will be set. More information.

… and we’d like to explain why. Our journalism now reaches record numbers around the world and more than a million people have supported our reporting. We continue to face financial challenges but, unlike many news organisations, we haven’t put up a paywall. We want our journalism to remain accessible to all, regardless of where they live or what they can afford.

This is The Guardian’s model for open, independent journalism: free for those who can’t afford it, supported by those who can. Readers’ support powers our work, safeguarding our essential editorial independence. This means the responsibility of protecting independent journalism is shared, enabling us all to feel empowered to bring about real change in the world. Your support gives Guardian journalists the time, space and freedom to report with tenacity and rigour, to shed light where others won’t. It emboldens us to challenge authority and question the status quo. And by keeping all of our journalism free and open to all, we can foster inclusivity, diversity, make space for debate, inspire conversation – so more people have access to accurate information with integrity at its heart.

Guardian journalism is rooted in facts with a progressive perspective on the world. We are editorially independent, meaning we set our own agenda. Our journalism is free from commercial bias and not influenced by billionaire owners, politicians or shareholders. No one steers our opinion. At a time when there are so few sources of information you can really trust, this is vital as it enables us to give a voice to those less heard, challenge the powerful and hold them to account. Your support means we can keep investigating and exploring the critical issues of our time.

Our model allows people to support us in a way that works for them. Every time a reader like you makes a contribution to The Guardian, no matter how big or small, it goes directly into funding our journalism. But we need to build on this support for the years ahead.