Craft works: ‘We both make things – it was important our home reflected that’ 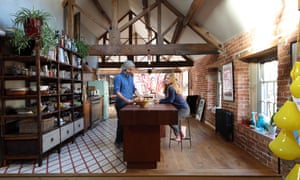 Wirksworth has always been a place where people make things,” says Esther Patterson. The Derbyshire market town is where Richard Arkwright opened the world’s first steam-powered mill. During the 1800s they churned out actual red tape for Whitehall. In the 21st century production workers have been replaced by craftspeople and factories have been turned into studios for the ceramicists, metalworkers and designers… People like Patterson, who give Wirksworth its Bohemian edge.

“This is a friendly place, too,” she says, whose business, Curiousa & Curiousa, specialises in colourful, contemporary lighting made by hand in the town. “It can take me 20 minutes to walk down our street, because there’s always someone to chat to.” Patterson’s home, which she shares with her husband Paul Carr and two grown-up children, feels equally sociable. In the 19th century, the red brick building was a malthouse, filled with pungent piles of grain fermenting for beer. The couple have preserved its industrial, open-plan architecture, adding rugs, art and bright wallpapers so that it feels like a cross between an urban loft and a country house.

For her latest pieces, Patterson took inspiration from her garden to create silk lanterns for the sitting room

“We moved here from a townhouse with a small sitting room, so we wanted to have a big, communal space where the family could all meet,” says Carr, a graphic designer. They divided the long rectangular space. Glazed screens separate bedrooms at either end; in the middle, the convivial sitting room flows towards the kitchen, bright with hanging plants, and the dining area, where new doors lead to a terrace.

“Both of us love making things, so it was important that our home reflected that,” says Patterson. In the kitchen they covered one wall in Venetian plaster to contrast with the gleaming oven hood, made by layering copper leaf over an inexpensive extractor. The shelving came from an old mill and the cabinetry was salvaged from a school science lab, with metalwork forged by a local blacksmith.

Unpainted brick walls provide a backdrop for art by friends: ceramics by Anna Collette Hunt and paintings by Pat Shenstone, Isabel Pugh Cordero and Ian Groom. “We’ll do swaps for my lighting. It’s a very symbiotic arrangement,” says Patterson. The striking mural in the dining room is by her son Gabriel, its brightness offset by the monochromatic painting by Ben Lowe. A rustic chair is by Full Grown, a company which trains trees into the shape of furniture. Fellow Derbyshire designers Blackpop produced the painterly fabrics, which revived the mid-century seating. 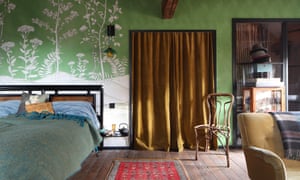 In the bedroom, Patterson painted the emerald chinoiserie wallpaper. “My mother is a painter and I had a creative upbringing, filled with gardening, craft and painting. I enjoy trying out different things,” she says. Patterson’s glass lights, which cascade from beams like otherworldly planets, are handblown so that no two shapes are alike. “Designs pop into my head and I’ll sketch them in my notebook. Going for a walk, photographing leaves or flowers can be the start of a new piece. I’ll often design something for myself and it’ll become part of the collection.” For her latest pieces, Patterson took inspiration from her garden to create the silk lanterns, which add exoticism to the sitting room.

Patterson’s lights also bring colour to the ground floor. “We’d planned to turn it into a studio, but it’s a dark, difficult space.” So this community-minded duo formed a plan. “Wirksworth lost its cinema in 1967. We’d been running open-air cinema events, so we knew there was demand for one here,” she says. To raise funds, they sold a plot of land that they owned and, with a flurry of last-minute donations, opened Northern Light, an independent cinema. “It was a huge undertaking, but if you’re in the arts, you have to take risks.” It feels like an extension of their home. “It’s a place for locals to meet and have a drink,” says Patterson, tweaking a popcorn display. Friends sanded the salvaged seating, painted walls and hung the vintage mirrors, which reflect Patterson’s lights. 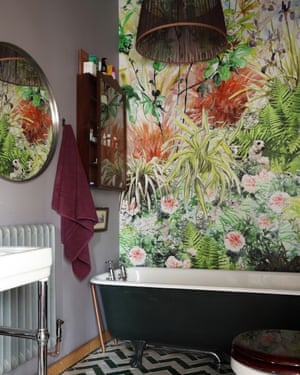 Patterson made her first pieces when she was studying decorative arts at Nottingham Trent University. “I went as a mature student in 2006. It was a brilliant three years experimenting with woodwork, ceramics, printing.” A chance encounter inspired her to start Curiousa. “I’d been making lamps out of slipcast bone china. One day a glass blower visited the college. I asked him to blow one of my table lamps. It took him one afternoon – mine had taken six months. That was my Eureka moment.”

Graduating with a first-class degree, she shoehorned her furniture and wallpaper designs into a stand at the London Design Fair where her trailblazing lights scooped an Elle Decoration award. “No one was doing contemporary coloured lights, so we stood out.” Liberty placed an order. Harvey Nichols, the Royal Albert Hall and Jamie Oliver (who has Curiousa lights in his kitchen) followed suit.

From a workshop in a caravan, the business has grown to include a staff of nine with a showroom in London. A new range of waterproof lights has been introduced for bathrooms, and Patterson hopes to put her hand-painted wallpapers into production soon, too. The glass is blown in Derbyshire; the lights assembled in the factory, which once made red tape. “I can’t imagine making our pieces anywhere else,” she says. “I’d feel as if I’d lost a bit of my soul.”